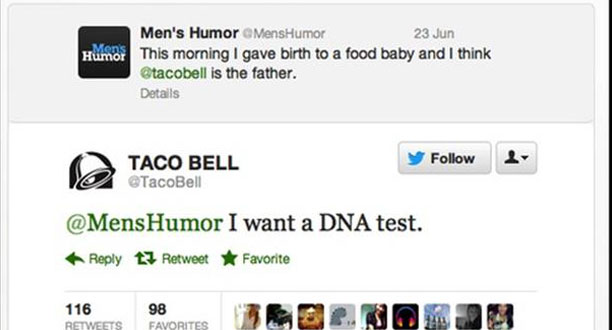 Yeah. You read that right. It’s time that we recognize the Taco Bell marketing team for being Twitter geniuses. With thousands of retweets and favorites each day, they have mastered the art of winning people over in under 140 characters.

They appeal to their audience – which, let’s face it, is often college students heading home from the bar. The restaurant’s low prices (with several options in the dollar range) and late drive-thru hours make it a hot spot after closing time. It’s also popular among high school students. After all, it is immortalized in the popular teen movie Mean Girls: Karen consoles heartbroken Regina by asking, “You want to do something fun? You want to go to Taco Bell?”

On their Twitter, Taco Bell uses slang words and phrases of the moment to their advantage to get laughs from the younger crowd because for them, there are few things funnier than a fast food restaurant talking like a hip teenager.

For example, last month one young user tweeted “Baby put on something fancy we’re going to Taco Bell tonight.” Even though the tweet seemed to be poking fun at the restaurant’s ultra-casual atmosphere, Taco Bell responded with “Oh, you fancy huh?” – a popular, heavily-quoted line from a 2010 Drake song featuring T.I. and Swizz Beats. The boy was blown away: “Ummmmm Taco Bell just used OUR phrase!!!!!!” he tweeted at his friends. 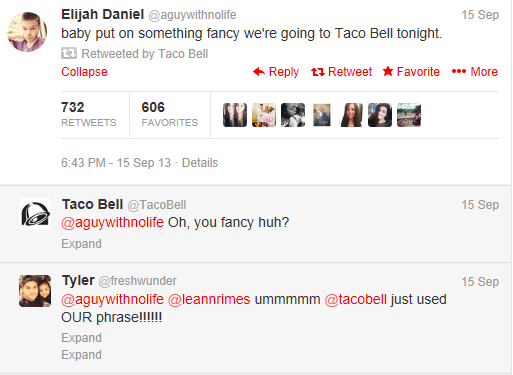 In another recent example, the restaurant tweeted “Don’t be basic! Eat Taco Bell.” This was in reference to Kreayshawn’s “Gucci Gucci,” a song released in 2011 that later went viral and popularized the term “basic” in regards to being unfashionable.

That last example brings us to our next lesson: if you’re going to be promotional, be hilariously over-promotional. Don’t bore your followers to death; instead, make them laugh with and at you. Rather than posting a link inviting followers to check out your latest product or whitepaper, your Twitter team could take a page out of Taco Bell’s book to say things like:

Those are all actual Taco Bell tweets from the past two months. The third one garnered more than 5,000 retweets and more than 2,000 favorites. Tweets like these not only make your brand more loveable, but give it a certain honesty and transparency that is refreshing to internet users – and could make them respect you more. As inbound methods still reign supreme in the marketing world, these overly-promotional tweets brilliantly poke fun at old outbound methods.

Encourage your fans and followers to get creative. Last month, in lieu of homecoming season, Taco Bell invited their followers to do just that. They tweeted: “If you ask her to Homecoming with @TacoBell, you’re doing it right.” This spawned a series of responses from high school girls who included pictures of the creative Taco Bell-inspired homecoming invites they received. How fun! They also made use of a trending topic: “#HowToAskSomeoneOnADate Want to go to Taco Bell?” 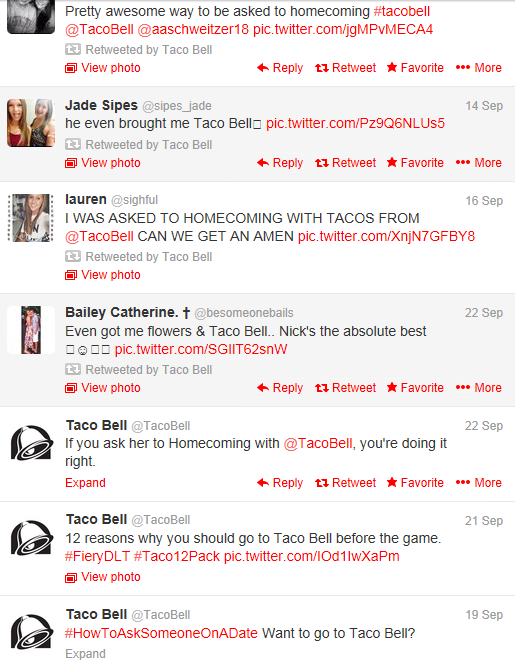 This encourages followers to get creative by replying or retweeting with their own clever endings. And that’s not all. In September they also invited their followers to create Vine videos of their theatrical reactions to the new Fiery Doritos Locos Taco. These tactics invite followers to interact with the brand in a various ways.

Lastly, and maybe even most importantly, Taco Bell replies to just about everyone who tweets at them. Not only are their responses funny, falling in line with their very consistent sense of humor, they also work to increase interaction with their followers. They even reply to those who make fun of the brand, often offering a playful comeback. One famous example occurred when Old Spice accused Taco Bell of false advertising for not making their “fire sauce” with real fire. Taco Bell fired back: “Is your deodorant made with really old spices?” Boom, roasted.

Because Twitter users know that there is a good chance of Taco Bell responding to them personally, it makes them more likely to tweet at and about them. As mentioned, they have famously tweeted back and forth with Old Spice, as well as the popular Men’s Humor account, a fake Michael Jordan account and more recently up-and-coming celebrities like Ed Sheeran. Tweeting with Sheeran, for example, puts Taco Bell on the radar for the singer’s followers.

High school students, college students and celebrities make up much of the Twittersphere… so with all of them talking about Taco Bell, the restaurant is succeeding in spreading its brand like wildfire. 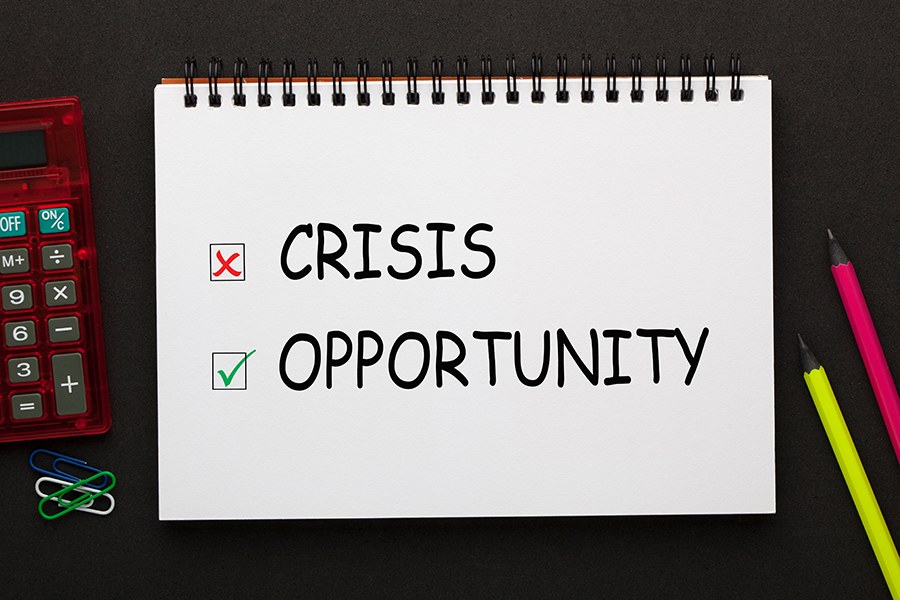 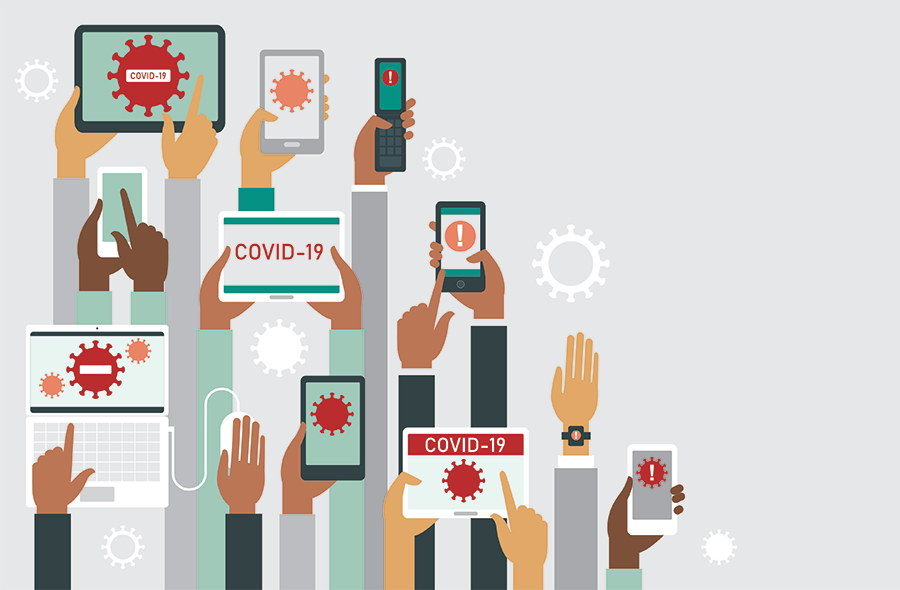 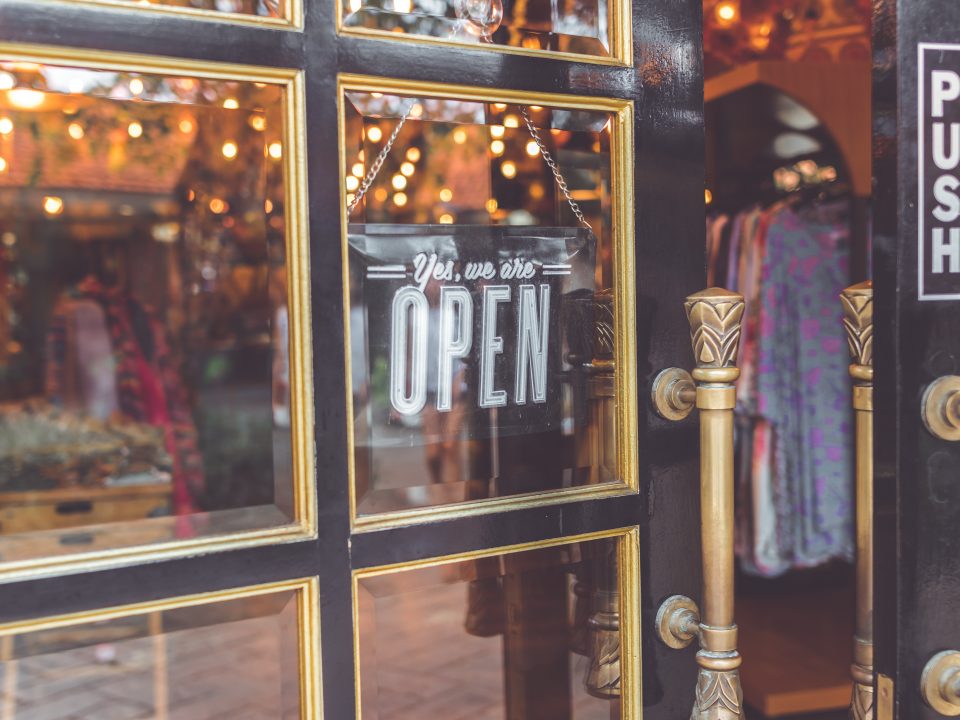 Why an Inbound Marketing Plan Works for Retail